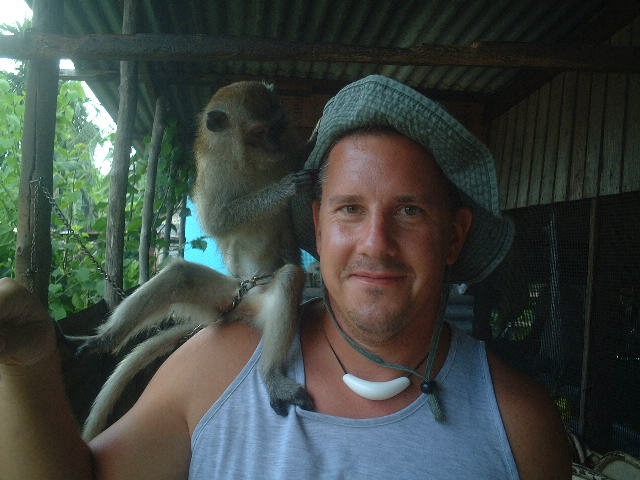 About Me
I have been teaching math at a private school on Guam for almost 20 years. I have a masters degree in technology in education. I am interested in shaping education to this century. My RealWorldMath.org website shows how Google Earth can be used to teach math topics.

Please visit the IT website I've created for math teachers. Real World Math: Lessons for Enhancing the Math Curriculum is a resource site with activities and lessons that use Google Earth to teach mathematics. The site currently has 20 lessons that embrace active learning. Many lessons are cross-curricular, so other subject areas may find the site interesting as well. Users can submit lessons to be included on the website and there is a blog page for related discussions.

Kudos to you if you made it past the 2 minute mark; it's not that hilarious or entertaining.  Sure it's stupid, but think about what the kids are trying to do: use a computer to order a pizza.  They know the sequence of questions typical in a pizza order: where do you live, what is your phone number, what would you…

I've been giving this some thought lately and I've decided our interaction with popular technology can be summed up with five verbs. By popular technology I mean in large part that which has to do with personal computers, and by stating five verbs I'm sure that means there are more I haven't considered. Nevertheless, the verbs I've decided on are commonly used with many applications and are associated with other… Continue

With your interest in Education Technology, I recommend you take a look at Wiziq's virtual classroom and authorstream's power point presentation platform. Both are web based platforms, have a bunch of features and free basic service. Here’s a public class recording you might find of interest.

Get your own Virtual Classroom

Lorraine said…
Hi Thomas,
Thanks!
Video link
There will defintely be real world applications for all of those geometric properties!

Barbara McLaughlin from Ottawa, Canada here.
I responded to your Google Earth website post, and forwarded the link to my district.
We are spotlighting Google Earth this month, but I am very interested in Google Lit and Sketch up.
I think that a cross-curricular approach to Web 2.0 tools is correct.

BTW many of your links on the home page to your site didn't work. for me tonight. I had to go into a link that worked (Resources) and then got into your site. Just thought you'd like to know that.
I will gladly share resources.

Jerome Burg said…
Hey Thomas,
Jerome Burg from Google Lit Trips here. I was wondering if you received my message about giving your Real World Math site a little boost on Google's new Crib-Sheet for Google Earth. I included a URL for your site in the area for suggestions for using Google Earth in Middle School. I was hoping to get an okay from you, but I think I used a bad email address. I love your site!

Sue Wyatt said…
Hi Thomas,
Thanks for that hint from google earth layers. I have only just started to look at this type of resource.

Eric Brunsell said…
Thomas-
It's cold here! We're in the -20F range for wind chill... There is a small IT / Ed Tech informal group in the States, but classroom implementation has been hit or miss. You might find some like minded individual among the people that I follow on Twitter.

I just read your posting about using Google Earth in math and I wanted to let you know about a new social network that I am starting in collaboration with Classroom 2.0. It is titled, "Teaching Content" and it's address is http://www.teachingcontent.ning.com. This social network site is designed to specifically host discussion about using Web 2.0 technologies for teaching content. I'm hoping that you might be interested in joining this network and helping to promote engaging discussion on it.

Judy Beam said…
That sounds awesome. I'm anxious to see what you come up with. I'll keep up through the discussion thread.
Judy

Judy Beam said…
Hi Thomas,
I noticed you've been working with Google Earth and I am interested in knowing more about that and what you do with it. I work in technology integration for a small district in Kansas. I work with K-12, but mostly K-8 and I have a classroom who is using Google Earth. Thanks
Judy

Jerome Burg said…
Thomas,
In regards to the questions you left on my site...
I also struggle with how much and what to put on my website. I've decided not to try to be "everything" Google Earth, but rather to emphasize the central purpose for my site which is the use of Google Earth to focus on literature. Thus, I am only constructing "peripheral" materials such as the basics video if they serve the purpose of supporting the development of a Lit Trip. You'll notice that I spoke specifically about LitTrips throughout that video when I could have made it a more generic introductions to the Google Earth interface.

As to the tools I used for the videos. Well, I'm a die-hard Mac guy. All the tools used are tools that come free on Macs. I used Keynote (very similar to PowerPoint) to assemble the pictures and to add the red boxes and red arrows that appear. Then I used GarageBand to create a "podcast" (though I had no intention of actually using it as a podcast) to create an enhanced podcast with slides, the intro and exit music, and the voiceover. The fact that I used a podcast format is the reason why the video is in a square format.

The entire website is built on one of the website templates available in iWeb. All of the pages you see are "tweaked" template pages from iWeb.

Finally, I simply publish to my .Mac server account (not free) directly from iWeb.

It's all incredibly smoothly integrated on the Mac platform.

By the way, have you seen the .kmz file where some teacher uses Google Earth to have kids do various calculations based upon a parking lot? What percentage of parking spots are used? What percentage are available? area of the lot? area of each parking spot? Amount of space required for backing out of a spot without bumping into cars behind. All sort of math embedded questions.